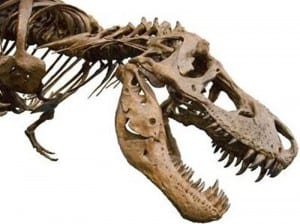 Each year we have many nursery children who are interested in learning about dinosaurs and this year the interest developed further when the ‘Walking with Dinosaurs’ arena tour came to the local area.

The first adventure we encountered on our journey was the dinosaur quest which took part over a series of days. The nursery garden was turned into a dinosaur island with the sandpit representing a desert.

For their adventure the children became archaeologists and began hunting for anything that the dinosaurs may have left behind. They learned that some archaeologists hunt in the desert and use special tools and brushes to uncover dinosaur bones. After many different quests through the jungles, caves, long grass and swamps they reached the desert and this is where our dinosaur story began… 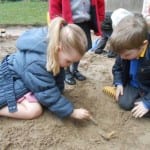 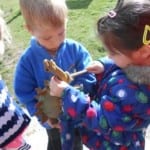 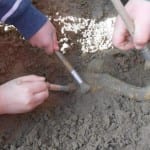 The archaeologists very carefully began searching using their special tools, some children became watchers and kept a look out for approaching dinosaurs. They used walkie talkies to communicate with the archaeologists. After thorough investigations the children began to unearth some interesting facts. Dinosaurs were being discovered, some big and some small! “Look at this tiny one” Finley said, showing it to all his friends. To help the archaeologists find out more about dinosaurs they used books, looking through them and learning how to use an index and contents. To examine the dinosaurs further the children worked tirelessly brushing away the sand to look at the colours, markings and shapes of the dinosaurs.
Some were identified quickly whilst others took lots of time and teamwork.

“Watch out!” Someone shouted, “There’s a Dinosaur over there!” Pointing over to the Jungle.
“It’s a Tyrannosaurus Rex!” Shouted Zach.
All the Archaeologists froze in place and waited for the dinosaur to pass.
“It’s alright now” informed William and everybody got back to work.

The last dinosaur was buried deeply and it took lots of Archaeologists to unearth it from the desert, until at last it too was conquered.

After the dinosaur quest had taken place the children continued researching dinosaurs through books and using the internet, using their findings to create drawings and paintings to represent dinosaurs. They used their new knowledge to choose the colours and textures to represent the different dinosaurs. Some children were even lucky enough to go and see the real ‘Walking with Dinosaurs’ with their families.

After taking part in all these experiences Zach expressed how much he wanted to make his own dinosaur movie and Finley offered to help. The boys were able to initiate conversations about dinosaurs, attend to and take account of what one another said about the dinosaurs. They were able to introduce and share important facts about each of the dinosaurs and captured them in their “natural habitat”. However their was trouble brewing in the dinosaur world and a battle ensured. After the battle the boys went on to explain the extinction of dinosaurs and demonstrated with a range of props and speech how this took place. 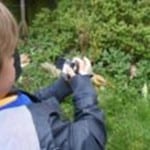 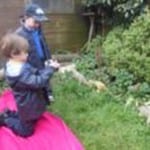 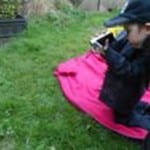 Learning Journeys, The Dinosaur Diaries Movie was completed, displays and books were created to document the Dinosaur Experience. 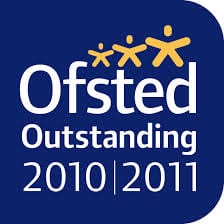 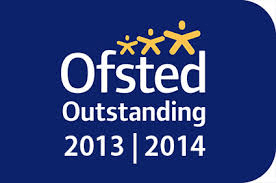